Every litre of storage capacity is usable heat 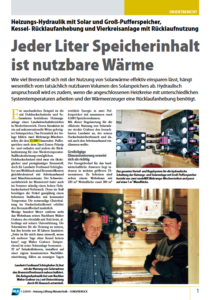 How much fuel can be effectively saved by using solar heat depends largely on the actual usable volume of the solar storage tank. It also becomes hydraulically demanding if the connected heating circuits operate at different system temperatures and the heat generator requires a return flow boost. 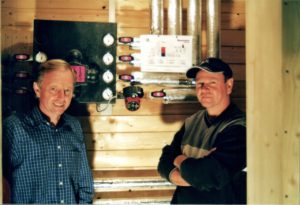 An illustrative example is the one with Woodchips and solar heat for a heating system at an agricultural business in Lower Austria. Its attraction is a solar storage tank manufactured in an unconventional way. At the heart of the system are two multi-way mixing manifolds that load and unload the 22,000-litre buffer storage tank according to the two-zone principle and also enable the return flow to be used for low-temperature stable floor heating. Woodchips are an ecological and inexpensive fuel, but for farmer Ferdinand Schörghuber from Wolfsbach, fuel costs are synonymous with labour input and machinery use. The pig breeding farm in the Mostviertel region had a constantly high consumption of wood chips, even in summer. This is because the piglets need a heated stable floor with a constant temperature all year round. The need to keep the woodchips in the boiler at a constant temperature increased the fuel demand even more. A few hundred metres away is the house of his neighbour Walter Grabner, who also heats with wood, but with solar support. Using solar heat for heating fascinated him 30 years ago: "Solar makes sense to me when I can heat for several days without a boiler," says Walter Grabner. His solar system is sized accordingly - 22 m² of solar collectors, installed on a specially constructed tracking device, fill two buffer tanks with a combined storage volume of around 4,500 l with plenty of energy on sunny days. 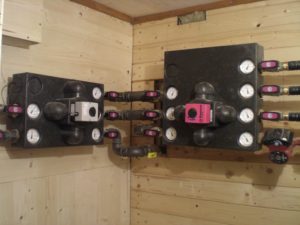 Fig. 2: The entire distribution and control system for the hydraulic switching of the heating and solar system with large buffer tank consists of two rendeMIX multi-way mixing manifolds and fits on about 1 m² of wall space

With this enthusiasm for the efficient use of solar heat, Grabner infected the neighbouring farmer, who wanted to curb his wood chip consumption and thus also the amount of work.

Generous dimensioning proves to be correct

The energy demand for the agricultural property, however, is much larger. In addition to a residential house with 220 m² of living space, about 300 m² of floor heating are needed for the barn, plus an additional floor heating system for drying the wood chips, which the farmer has to process and transport by the ton. Until now, the 75 kW woodchip boiler covered the heat demand alone. All together, it was about four times larger than Grabner's home. With neighbourly support, a plan finally developed into a solar-supported heating system of an unusual kind. For the dimensioning of the solar system and the buffer storage volume, Walter Grabner extrapolated his own system concept by a factor of four to the needs of the farm. The results of this calculation were around 20,000 l buffer storage volume and 88 m² solar collector area. That he should be right with this dimensioning was confirmed in the halving of fuel consumption, as was to turn out later. "We switched off the boiler at the end of March," reports farmer Ferdinand Schörghuber in autumn 2009. Until the beginning of October, only the solar system supplied the heat for the house, barn and hot water.

Beforehand, however, Grabner and Schörghuber were faced with the question of how the required buffer volume of 20,000 l could be realised - and at the lowest possible cost. The structural conditions in an outbuilding of the pigsty did not offer too much space for a storage installation in terms of surface area, but all the more so in terms of height. As a former foreman of the ÖBB (Austrian Federal Railways), Walter Grabner already had a solution in mind, which at that time was rolling on rails towards the siding: his plan was to convert the container of a discarded boiler wagon into a solar storage tank. Some time later, the large container, separated from the chassis and cleaned inside, was standing on the Wolfsbach farmer's farm. With a passion for unconventional solutions, coupled with solid construction knowledge and skilled in metalworking processes, Grabner shortened the former freight wagon tank by about a third to make it into a vertically standing storage tank. The heat exchanger is made of 28 mm copper pipe, which he specially ordered in rolls so that he could wind spiral-shaped heat exchangers from it using agricultural machinery. In the lower part of the storage tank, two spiral tube heat exchangers with a heat transfer surface of 7 m² each were used, each for one half of the 2 x 44 m² collector field.

Two-zone charging and return use 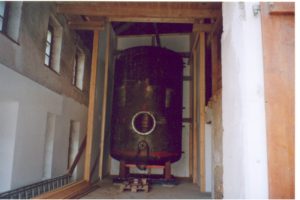 Fig. 3: The solar buffer tank measures 4.5 m in height and holds around 22 m³ of heating water.

In addition to building the solar storage tank, Walter Grabner was intensively concerned with how to set up the hydraulic circuit of the entire heating system. Two challenges arose: The first question was how to obtain usable heat from the buffer at any time without first having to heat several thousand litres of heating water. After all, a large storage volume is of little use if the entire content only has a lukewarm mixed temperature. The second issue was the different system temperatures: while the radiator heating circuits of the residential building are designed for 70/50 °C, the barn floor heating system operates at 40/30 °C. The woodchip boiler supplies the heating water at a constant temperature. The woodchip boiler, however, supplies 80 °C flow temperature, while the return temperature must not be below 60 °C. What was needed was a distribution and control system that could reliably supply the respective circuits with the required temperatures. Walter Grabner's search led him to the rendeMIX multi-way mixing manifold via a catalogue for heating technology products. He was convinced by the principle of two-zone charging and discharging of the buffer and the possibility of using the return flow. Furthermore, the loading and unloading principle, which is distributed over two buffer zones, made it possible to realise the required return flow boost at the same time. The manufacturer HG Baunach, based in the German state of North Rhine-Westphalia (www.baunach.net) exchanged ideas with Grabner and drew a system diagram for the hydraulics of the solar-assisted heating system with the large buffer tank and different temperature requirements. Two rendeMIX multi-way mixing manifolds were planned, which simultaneously serve to build up stratification in the storage tank and to mix the temperatures:
System hydraulics between heat generator and buffer tank, two-zone buffer loading 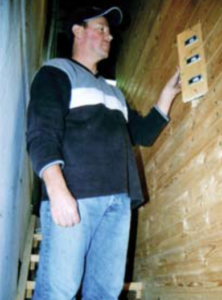 Fig. 4: Walter Grabner integrated three thermometers into the wooden cladding of the converted and insulated buffer tank at viewing height in order to check the temperatures in the upper, middle and lower buffer zones. 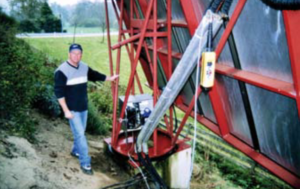 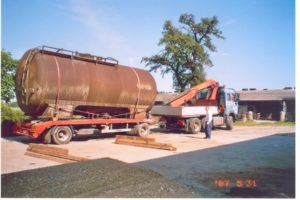 Fig. 6: Saved from scrapping: a discarded ÖBB tank wagon was converted into a solar storage tank.

The charging and discharging of the buffer storage tank follows the principle "hot longer at the top - cold faster at the bottom". During an on-site visit on an October day with an outside temperature of +9 °C, the thermometers on the multi-way mixing manifold show how the heating demand and the heat supply in the buffer behave:

From below, the solar system supplies heat that is used for the stable heating via the middle buffer zone. The position of the actuator shows that at this moment the rendeMIX draws about 1/3 heat from the upper buffer zone and 2/3 from the middle zone. The 75 kW boiler needs about 12 hours to heat up the buffer content to the level of the solar heat exchanger. "Now a 20 kW boiler would suffice for the whole farm," estimates Walter Grabner. Farmer Ferdinand Schörghuber is particularly pleased that the amount of work he has to do for the production, transport and storage of the woodchips has almost halved. 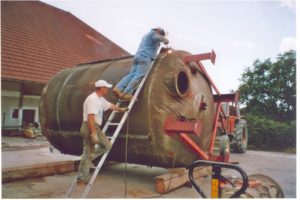 Fig. 7: ... the heat exchanger could be inserted into the storage tank, which had been shortened by about a third, and the bottom welded back on.

During the planning phase, HG Baunach made a side calculation that illustrates the dimensions of the buffer storage tank: If 4.5 m of storage height (simplified as a cylinder) holds 22,000 litres, 15 cm of storage height corresponds to a content of 750 litres - the average size of a conventional single-family home solar storage tank. In other words, the size of the buffer tank is less important from a hydraulic point of view than the amount of heat that can be used from it. The example of this system shows that truly efficient use of the buffer content is only possible through the principle of two-zone charging and discharging. The rendeMIX, which discharges two buffer tanks with a total capacity of 4,500 litres in Walter Grabner's house, works according to the same principle. In his experience, a generously dimensioned buffer volume has a significant advantage: "It can always happen with solar use that the boiler has just heated up the buffer and suddenly the weather changes to sunshine. 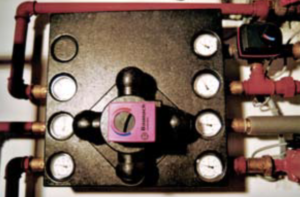 Fig. 8: The rendeMIX in Walter Grabner's home is the switching point between the buffer storage tanks and a dual-circuit system with radiators and underfloor heating.

Then there is still plenty of space in the lower buffer area to charge solar heat," says Walter Grabner. The rendeMIX ensures that the lower buffer area always remains cold. The actuators for the multi-way mixing manifolds are simply controlled via a three-point signal that originates from a conventional heating control system. "Innovative heating engineers simply have to get to grips with the way the rendeMIX works," recommends Walter Grabner. 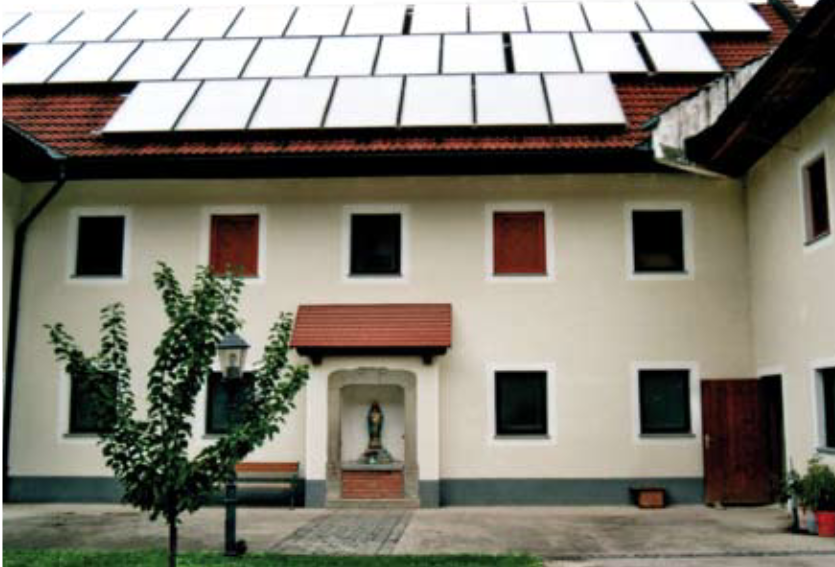