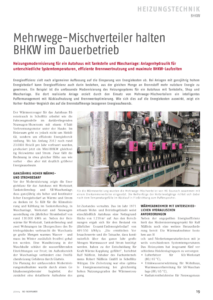 Energy efficiency is generally understood to be aimed at saving energy costs. For facilities with a high year-round energy demand, energy efficiency can also consist of obtaining more usable energy from the same amount of fuel. One example is the comprehensive modernisation of the heating system for a car dealership with a petrol station, shop and car wash. The system implemented there achieves intelligent buffer management with return utilisation and condensing value optimisation through the use of multi-way mixing manifolds. A before-and-after comparison of the energy expenditure related to the amount of fuel shows how this affects the energy costs. Like the vehicle models in the new car showroom above, the heat generator for the Bärenstrauch car dealership in Scheßlitz works with a 4-stroke combustion engine under the bonnet. In the boiler room, however, the focus is not on mobility, but on efficient energy provision. Where until the beginning of 2012 around 3,000 litres of fuel oil were burnt per year, a mini CHP now produces heat and electricity at the same time. Although the bill is roughly the same as before, the energy yield is significantly higher. 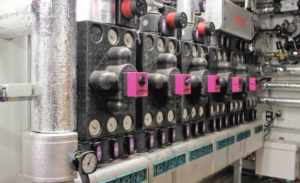 Fig. 1: For heat distribution, the multi-way mixing manifolds from HG Baunach GmbH & Co. KG were used together with a three-chamber distributor. The sequence of the distributor outlets is based on the temperature gradient in the return flow in the direction of flow to the buffer storage tank.

High heat and power demand all year round

Before the modernisation, the energy balance for the car dealership with workshop, petrol station shop and self-service car wash showed that there is a high and continuous energy demand for heat and electricity throughout the year. For example, air conditioning and cooling in the petrol station shop, car wash, workshop and new car showroom require around 130,000 kWh of electricity per year. In addition to the heating for the workshop, petrol station shop and two flats on the upper floor of the company building, the car wash consumes large amounts of hot water - and must also be kept frost-free in winter. A wall heating system in the wash hall protects the water-bearing equipment from frost; in the outdoor area of the wash facility, an open-air heating system prevents hazards from black ice. The planning of the comprehensive modernisation measure was accompanied by a building energy consultant, who first carried out a detailed survey of the current state. The residential and commercial building, built in 1971, has a net floor area of 1,239 m², including the car dealership. The calculations resulted in a total annual final energy demand of 499,550 kWh/a for the existing building. "The consumption values determined and the fact that large amounts of hot water and electricity are required continuously throughout the year led to the decision in favour of combined heat and power generation," reports Ralf Nüßlein, owner of the specialist company Robert Nüßlein GmbH in Scheßlitz-Würgau. The objective was to optimise energy utilisation while at the same time achieving a high degree of efficiency in heat generation.

In addition to the targeted energy efficiency, the modernisation project presented Ralf Nüßlein with another challenge: The heat consumers consist of high- and low-temperature circuits, each with different system temperatures. The heating system has to supply a total of five different heating circuit groups:

Master heating engineer Nüßlein solved the demanding hydraulic task with multi-way mixing manifolds. The "rendeMIX" mixer groups from the manufacturer HG Baunach work according to the principle of a five-way mixer. The actuator of the rendeMIX connects two of its three inputs to one output each. In this way, either hot water is mixed with warm water or warm water with cold heating water. This not only makes maximum use of the temperature available in the heating water network, but also reduces the return temperature to the heat generator. The system includes a specially developed three-chamber manifold with an additional return chamber. With this technology, the principle of return flow utilisation is realised - thus a gradual temperature reduction of the return flows. If, for example, there is excess heating energy with a return temperature of 60 °C in the return of a high-temperature circuit, this available temperature level is used to supply a heating circuit that requires, for example, 50 to 60 °C flow temperature. Only when the heat energy from the return of a circuit with a higher system temperature is no longer sufficient to cover the heat demand, do the multi-way mixing distributors access the buffer storage tank.

Fig. 3: The rendeMIX connected between the CHP unit and the buffer storage causes the buffers to be loaded according to the two-zone principle and at the same time ensures the return increase to the CHP unit.

Base load heat demand and electricity generation at the Bärenstrauch car dealership are met by a Dachs CHP unit from Senertec with outputs of 15 kWth and 5.5 kWel covered. A Vitodens gas condensing boiler from Viessmann with 100 kW nominal heat output serves as the peak load boiler. "The peak load boiler is constantly operating in the condensation range - if it is operating at all, because the CHP runs almost continuously," says Ralf Nüßlein. Via the multi-way mixing manifold - in conjunction with the three-chamber manifold and the route via the lower buffer zone - the two heat generators receive low return temperatures and thus achieve long running times. These are achieved despite a comparatively small buffer volume. Due to the low room height in the boiler room of just under 2 m, only a 900-litre buffer tank could be installed.

In order to maximise the energy yield, the CHP unit also works with condensing heat utilisation. In Ralf Nüßlein's experience, however, it is not enough to simply connect a condensing heat exchanger: "With a CHP unit, the entire system must be precisely adjusted if an additional energy gain is actually to be achieved through condensing value utilisation." For this purpose, the master heating engineer, who is well-versed in system hydraulics, has installed a multi-way mixing manifold of the type "rendeMIX 3 x 3 Condenser"is connected between the CHP unit and the buffer storage tank. The abbreviation "3 x 3" means here that three inputs or outputs are controlled both to the heat generator side and to the buffer storage tank. The condenser ensures that only a limited amount of heating water with a low temperature is taken from the lower buffer zone of the buffer storage tank. The stratification structure thus remains largely undisturbed. The effect of this mixing distributor between the CHP unit, the flue gas heat exchanger and the buffer tank can be seen in the thermometers in the system: At the on-site visit on a December day, these showed a temperature difference of around 8 K between the return from the buffer storage (38 °C) and the flow from the flue gas heat exchanger (46 °C). The heat gain from the use of the condensing boiler is used to increase the return flow for the CHP unit, so that long and uninterrupted unit running times can be achieved. 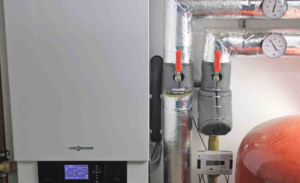 Fig. 4: The temperatures show that there is an undisturbed stratification build-up in the buffer tank and that the gas condensing boiler receives the low return temperatures required for flue gas condensation.

In order to determine the success of the hydraulic optimisation measures, a total of seven heat meters are integrated into the system - the car dealership is a company within the family, so the heating system also serves as a "test laboratory" for Ralf Nüßlein. The evaluation for the entire year 2013 shows a total of 7,589 operating hours for the CHP unit; of these, 800 operating hours were in the cold month of January alone. "By modernising the heating system and optimising the system hydraulics, significantly more useful energy can now be obtained from the same amount of primary energy," Ralf Nüßlein sums up. Compared to the previous heating system, for example, the complete energy requirement for the carwash - heating, hot water preparation and frost-free maintenance - can be covered without additional energy expenditure. In addition, the combined heat and power system saved costs for 41,000 kWh of electricity in 2013 due to the high number of annual operating hours.